Squires Restaurant Pastry chef has South Georgia on his mind

Life for a pastry chef at Newmarket’s luxurious Bedford Lodge Hotel & Spa will never be the same again after his experience catering for a conservation team 7,666 miles away in the Polar region of South Georgia.

French-born Jerome Viard, who now lives in Newmarket, was one of two chefs who spent three months on the island cooking for a team of 20 people from the South Georgia Heritage Trust that were ridding the landscape of a huge population of Norway brown rats.

James Fairchild, Head Chef for the 2AA Rosette Squires Restaurant, welcomed 28 year old Jerome back to his post as pastry chef with open arms after his adventure of a lifetime. Now he’s back with hundreds of wildlife pictures and stories about his trip.

The Habitat Restoration Project was necessary since the rodents have been threatening the native bird population.

While he admits it’s good to return to see colleagues at the four-star hotel and its fully equipped kitchen, not to mention fresh ingredients, he confesses that his heart belongs to South Georgia.

“I lived such an amazing experience – it is the most beautiful place on Earth. I have never seen so much wildlife. Penguins and seals are the cutest animals ever.

“The landscape was breathtaking such as the mountains, glaciers, snowy summits, icebergs, sea, amazing sun rises and cloud formations.

“I also got the chance to fly above all this and admire the island’s beauty from above. I had the best kitchen view ever: I could prepare my meals while looking at King Edward Cove, the snowy mountains in the background and penguins and seals at my door step. 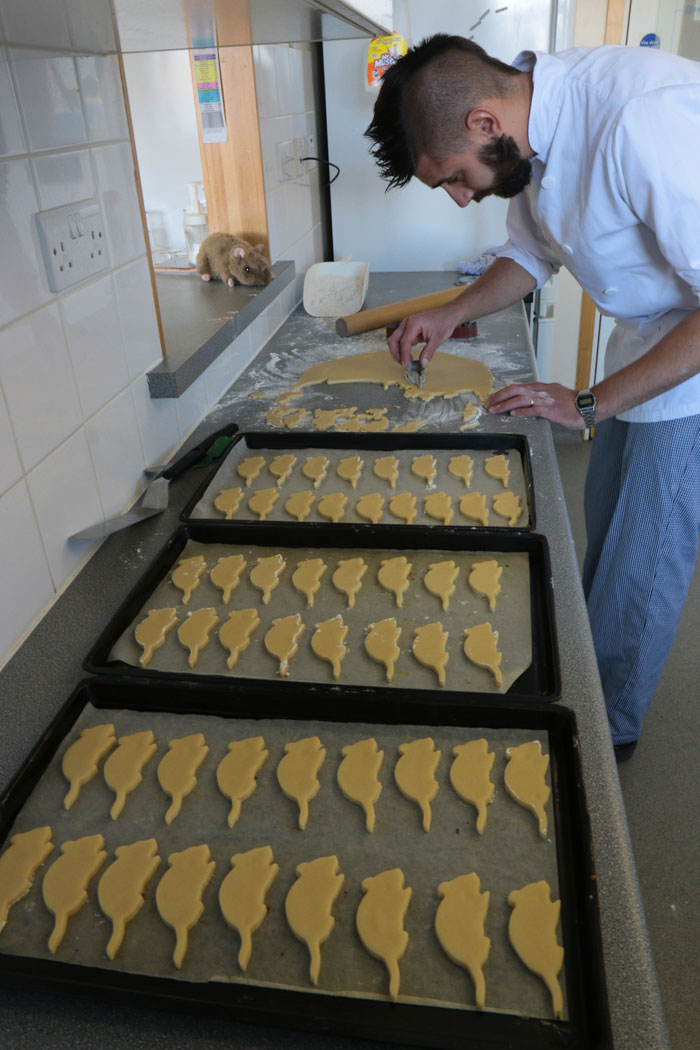 “So yes, I would do it all over again. I don’t think I could ever get enough of South Georgia. It’s hard to pick the biggest thrill, so I’ll go for the firsts: first time at sea on the RSS Ernest Shackleton; seeing a gigantic iceberg; flying in a helicopter; encounters with the wildlife… the list goes on.

One of the biggest challenges he faced was menu planning since popping down to Waitrose was not an option if he ran out of butter. Stocks mainly consisted of dry food from the UK with some meat and dairy products from the Falkland Islands, 963 miles away.

And dipping into the freezer was an expedition in itself as he had to visit an out building in all weathers, even at night!

“In my everyday job at the hotel I work with kitchen tools and equipment designed for cooking at high standards and for large numbers.

“So when I got to South Georgia and had to use a domestic oven that was cooking unevenly, it took me a while to adjust my standards with the food I was producing.

“So the biggest challenge was to accept that I could not deliver the same standard of food I was delivering back at the hotel.

“Being very passionate and meticulous about cooking – that hurt. But I soon learnt that even if the equipment and the ingredients were not great I could still produce decent food that the other members of my team enjoyed very much.

“People were so grateful for the food I made every day. I had to use a lot of imagination to come up with good dishes using elementary ingredients and tools.

“However, at the end of the time everyone was heavier than at the beginning of the trip – always a good sign.”

Noel Byrne, Chief Executive of the hotel, said: “It is great to be able to enable staff to follow their dreams. Jerome is a real asset to our team so it made perfect sense to let him know we would welcome him back after his adventure.”